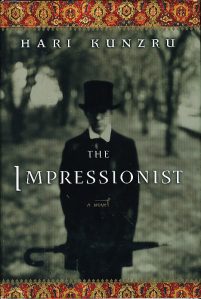 Hari Kunzru’s first novel is an ambitious and nuanced exploration of the destructive forces of empire, culture, and convention on the individual and society. Pran Nath, offspring of an upright but lost Englishman and a wild, doomed Indian woman, stands as a cipher for India’s paradoxical and destructive experience of Empire, and, eventually, for the futility of a life striving for conformity. Kunzru writes with great clarity and an eye for the telling detail in a story which sweeps from the Raj, through Oxford, to Paris and the plains of Africa, as Pran occupies successively more nuanced characters in an attempt to find a place of safety, of repose and belonging. In so doing Pran bears witness to the twin mirrored poles of the occupier and the occupied: mutual disgust paired with fascination and cultural misunderstanding. He eventually comes to personify that paradox and finds that it cannot ultimately be resolved.

For all that, Kunzru undercuts the pomposity of the English at almost every turn, that attachment to convention that is intensified and fetishized once the homeland is left behind. Such a fetishized conception of culture and etiquette finds its personification in Pran, who finds that the England he is trying to become, and that some he encounters still believe in, died on the battlefields of the Great War. In his attempts to out-English the English, he is ultimately left behind by the developing character of national identity and the youth he desperately wants to love and be loved by.

It is no surprise, then, that anthropology, the great homogenising tool of empire comes to the fore in the novel. The anthropological instinct of power is to catalogue, to generalise and generate regulating principles from the messy and recalcitrant mass of humanity. Kunzru gives the lie to that idea. Individuals are flashes of light playing on the surface of the world, lent depth by the flow of culture, history, geography. That fluidity of identity and the attendant problems of self-knowledge and belonging find expression in Pran’s inability to locate any core to his being: a problem many will recognise, but exaggerated here by the ceaseless search for stability and order in appearance and behaviour, for belonging. Such bad faith as Pran displays in his search for a role he can inhabit stands as an indictment both of doomed power – Britain after the Great War – and the corruption of national character through occupation.

To that extent, despite its depiction of repression, mutual distrust, and inhumanity, Kunzru’s novel is optimistic in its rejection of inauthenticity, its humour serving to emphasise the absurdities of attachment to convention whilst grounding each character’s humanity even as they stand as symbols for greater cultural currents, for visions of corrupted empire – as if there were any other kind.

Or from your local bookshop!

2 thoughts on “Hari Kunzru: The Impressionist”