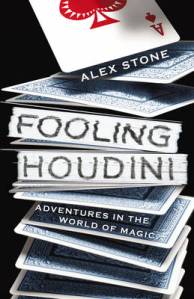 Out in paperback 5th July.

I have a confession to make. When I was a teenager I was something of a magic obsessive. I used to spend hours practising sleights in front of the mirror and dying for someone to ask me to do a trick (or ‘effect’ – I cared about the difference) as I sat shuffling cards at school.  I’m also a philosopher who researches the nature of our perception of the world around us: how our senses operate and interrelate, how our attention affects what we perceive, and how this all jumbles together to constitute our experiences of everyday life. So when I heard about Alex Stone’s Fooling Houdini I was rather excited. Stone is a PhD student in physics at Columbia University in New York, but he is also a magician whose ambition is to pass muster amongst the greatest practitioners the world has to offer. From abject failure on of one magic’s greatest stages to redemption on another, Stone interweaves the compelling narrative of his magical development under his brusque master Wesley James with an account of the cognitive, perceptual, and probabilistic underpinnings of the tricks of the magic trade, taking in the history of will to believe and the willingness of con-men to take advantage of human psychology. In the course of his investigation he discovers his identity as a magician and reveals the learning lying behind what many dismiss as mere trickery.

A card, freely chosen, perhaps signed, is returned to the middle of a deck of cards; that card appears on the top of the deck, is replaced in the middle, jumps to the top again, and does so in ever more mystifying ways. Perhaps the deck has a rope tied around it to prevent the magician meddling with it after the card is returned; perhaps a bend (a ‘crimp’) is put in the signed card to differentiate it from the rest: it nevertheless leaps, visibly this time, to the top once more. This is just one version of the ubiquitous Ambitious Card routine which all close-up card magicians have in their repertoire in some form. My version ends with the signed card appearing face­-up on the top of the deck, but there are many more impressive routines. It is, if you will excuse the pun, the calling card of the close-up magician. This is the effect with which the great Dai Vernon fooled Harry Houdini seven times one night in 1922. Flummoxing other magicians is the Holy Grail of legerdemain, requiring consummate skill and imagination. One of the most adept is Richard Turner. Blind from a relatively young age Turner is one of the greatest and most obsessive ‘mechanics’ in the history of magic. His sense of touch is so developed that when the United States Playing Card Company changed their production process he not only noticed but could tell them about alterations in texture, weight, and shape of which they were oblivious. They duly appointed him their ‘Touch Analyst’.

One of the major contemporary debates within the philosophy of perception centres around how we should go about determining the nature of the senses: in other words, how we go about understanding each sense and thereby differentiating sight from touch, smell from taste, hearing from sensing vibration and so on. Turner claims that he can see objects – his cards – as he handles them. This allows him to perform astonishing feats, cutting to cards in the middle of the deck by feel alone. Scans of the brains of blind individuals reveal that they do indeed seem to see with their fingers: the visual cortex is activated in a way associated with viewing objects rather than touching them in sighted subjects. This cross-modal (inter-sense) interaction undermines the traditional model of five distinct senses inherited from Aristotle. It is not only the blind who can experience the world in this way. Indeed, all magicians – myself included – come to develop a greater tactile sensitivity as they manipulate their cards, coins, cups and so on. I once rather shocked some friends at school who had sneaked two or three cards from my deck by asking for them back. I hadn’t seen them; I could just feel the difference.

‘Magic, at its core,’ Stone tells us ‘is about toying with the limits of perception.’ In perhaps the most fascinating part of Fooling Houdini Stone delves into the quirks of our attentional mechanisms which make misdirection possible. Whilst we see a great deal of what goes on around us, we do not, it seems notice everything: we don’t respond to it, and we can’t recall it. Competing cognitive tasks – counting the number of passes made with a basketball in a video, for example – can mean we miss an intuitively obvious perceptual stimulus – a woman in a gorilla suit waving her arms in the midst of all the passing. It is this kind of perceptual and cognitive limitation which makes some of the most celebrated effects possible. Such intentional blindness is at play when Stone steals the watch from the wrist of a prominent researcher into attention. Misdirection is all about manipulating attention, rather than simple distraction, and takes advantage of the potentially misguided intuition most of us have that we perceive a lot more than we actually do.

One of the real strengths of Fooling Houdini is the way it communicates the depth of learning and dedication the greatest practitioners achieve. The individuals magicians admire are not simply the rich or famous, but the most creative, penetrating, and dedicated. It’s little wonder that so many scientists, mathematicians, and intellectuals turn out to have a side-line in magic. Magic allows one to toy with perception, probability, order, and, of course, people, in a way few ethics committees would allow. Alex Stone’s judgement was flawed when, as a teenager, he thought that magic would make him less of a nerd, but he has produced a compelling and deeply interesting book on magic and the mind. I’m just never letting him near my watch.

Nearly a hundred years since it was first published in 1914 this collection of fifteen stories or ‘epiphanies’ remains powerful. In each Joyce depicts some aspect of damaged humanity as the collection moves towards its powerful consummation in ‘The Dead’.  As the excellent, if severe, essay by J.I.M. Steward emphasises Joyce’s style is one of ‘scrupulous meanness’: he spares no one their sorrow, be they temperate and kind or coarse, ignorant, and drunk. All are caught in the social and political paralysis that so exercised Joyce and which is foreshadowed in the form of a stroke victim on the very first page. A kind, trusting, and generous but ugly woman destined to be an old maid is loved by all but meets with misfortune in a harsh city full of men who do not desire her in ‘Clay’. In ‘Eveline’ a girl wrestles with the possibility of love and obligations owed to the living and the dead and ultimately falls backward into the dark. It opens thus,

She sat at the window watching the evening invade the avenue. Her head was leaned against the window curtains and in her nostrils was the odour of dusty cretonne. She was tired.

Joyce’s language is so precise and pared back, and yet so dense and resonant and rhythmic that it is a joy to read despite its lapsarian tone. Decline, decay, angst, and exhaustion are all contained in three taut sentences.

A sudden loss of innocence, a moment when the world opens out – never for the better – for a character or the reader is characteristic of each story. In ‘An Encounter’ a young boy sheds his innocence when approached by an old but impotent pervert. The story is full of play and of freedom until the old man becomes too free and frightens the boy away, his world changed. Indeed, the structure of the whole collection is one of maturation: youth, maturity, and middle age, and the shadow of death, with that shade extending back to pall each person occupying Dubliners’ pages. Joyce everywhere implies that religion is no protection against this decline even when it serves as a useful tool for an ‘us and them’ mentality. Priests come off badly throughout: in ‘The Sisters’ an elderly priest dies having lost his faculties and perhaps his integrity, a symbol of the Church in Ireland; in ‘Grace’ an unsympathetically portrayed Jesuit preaches to a gathering of businessmen, reducing a deeply human parable to a symbol of profit and loss for the consumption of a corrupt class. Poverty and shallowness of sentiment run throughout, particularly in the consecutive stories ‘A Painful Case’ and ‘Ivy Day in the Committee Room’ wherein want of feeling is explored to the full and loneliness and regret tinge the latter story’s mercenary canvassers’ apathy and idealisation of the past.

Throughout drink and perceived injustice lead to resentment and violence of feeling and action. In ‘Counterparts’ a resentful clerk seethes with a sense of emasculation at the hands of his diminutive but dominating employer. He metes out an unwarranted beating to his son whose plaintive cries serve only to emphasise the irrelevance of religion and the lost world Joyce feels Dublin and Ireland has become.

The boy uttered a squeal of pain as the stick cut his thigh. He clasped his hands together in the air and his voice shook with fright.

Undoubtedly the most powerful story in Dubliners is ‘The Dead’, at least in part because it draws in the threads of those which precede it, the shadows of those who have gone before hovering over a middle-class gathering in every sense. Memory, loss, age, and crude but sincere sentiment surround a highly literate but alienated school-teacher who comes to understand his isolation from his wife of many years. The final passage of ‘The Dead’ in which this realisation comes emerges from Joyce’s naturalism and consummates the social dissection of the whole in a symbolic identification of the human condition.

A few light taps upon the pane made him turn to the window. It had begun to snow again. He watched sleepily the flakes, silver and dark, falling obliquely against the lamplight. The time had come for him to set out on his journey westward. Yes, the newspapers were right: snow was general all over Ireland. It was falling on every part of the dark central plain, on the treeless hills, falling softly upon the Bog of Allen and, farther westward, softly falling into the dark mutinous Shannon waves. It was falling, too, upon every part of the lonely churchyard on the hill where Michael Furey lay buried. It lay thickly drifted on the crooked crosses and headstones, on the spears of the little gate, on the barren thorns. His soul swooned slowly as he heard the snow falling faintly through the universe and faintly falling, like the descent of their last end, upon all the living and the dead.

Or at your local bookshop!