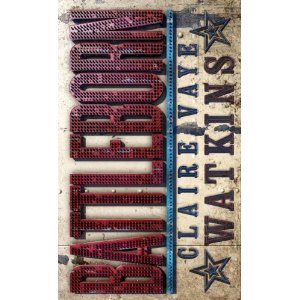 I’m pretty busy at the moment, but I wanted to post a quick review of the excellent Battleborn which came out this week in the UK.

Claire Vaye Watkins is one of those writers whose own history threatens to overshadow their writing: which would be a shame, because her short story collection is marvellous. Her father was intimately involved with Charles Manson’s ‘family’ before aiding the prosecution in Manson’s trial for murder; and her mother was a depressed alcoholic who died of an overdose in 2007 two months before Watkins graduated from college. Against the background of such a family history, it is unsurprising that Watkins has produced a collection of stories so concerned with relationships, their tensions and failures, mostly set against the hard landscape of her home state of Nevada whose nickname is ‘Battle Born’ because it achieved statehood during the Civil War. That birth in a time of violence and fear underpins the whole collection, whose hot and scouring prose reveals an unexpected softness and tempered resilience in the struggling occupants of each story.

‘The day my mom checked out, Razor Blade Baby moved in. At the end, I can’t stop thinking about beginnings.’

This first line of the first story Ghosts, Cowboys announces the haunting of many characters in Battleborn. This story interrogates Watkins’ own history, her own attempts to understand the context of her birth, and where one should even begin looking: the birth of the state, the occupation of a plot of land, or the arrival of a group of young people at the ranch in 1968. How much we can gain from this probing of the past is questioned by Watkins,

Intertwined with the personal is the West, the landscape shot through with veins of silver and death and memory. In Man-O-War a lonely old man finds a pregnant girl out in the fierce heat of the desert and comes to believe she could be a substitute for the wife who left him and the child they never had. The ease with which tenderness gives way to violence in the face of the frustrations of impersonal landscape runs throughout Battleborn. This is brought home strikingly in the excellent The Diggings which subjects two Forty-Niners to the heartless and grinding reality of the gold rush and the ‘lump fever’ which overtakes the narrator’s brother. (If nothing else, introducing me to the word ‘ripsniptiousness’ would be a virtue of this story.) He might be speaking for the whole collection when says,

‘Because though I was afraid and angry and lonesome much of the time, I was also closer to my own raw heart there in the territory than I have even been since.’

At no point does Watkins give her characters any quarter. There are no fairytale endings for the Italian boy who stumbles into a brothel and instantly destabilises its structure in The Past Perfect, The Past Continuous, The Simple Past; nor do the memories of the degrading trip to Las Vegas the female character forced her vulnerable friend into ease with time in Rondine al Nido. Dysfunctional relationships, missing or effectively absent parents, and the challenges of parenthood stand starkly against the heat and memory of the landscape. You can’t dissemble in the desert, it doesn’t allow it; and nor does Watkins, whose voice emerges powerfully from these stories, as does the fierce character of Nevada. The strengths and failings of a rugged individualism are subjected to the cutting edge of an uncompromising style. It’s a very good collection and I’ll be keen to see what comes next: whether Watkins will further dissect her home state and their shared history, or chooses to move outward. Either possibility promises much.