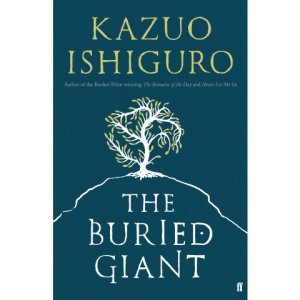 “You would have searched a long time for the sort of winding lane or tranquil meadow for which England later became celebrated.”

The first sentence is as good a place to start as any for a reflection on Kazuo Ishiguro’s first novel in ten years; and this is more of a reflection than a review, for The Buried Giant is a resistant, circular, and potentially frustrating work. The book begins with “You”: we are a part of this from the very beginning and are reminded throughout. We are immediately placed in a conceptual landscape and atmosphere, an idea of England as a patchwork of tranquil meadows valorized the world over: other Eden, demi-paradise.

But it is an idea we should question precisely for its celebrity. The winding path to John of Gaunt’s bitter lamentation for sleeping England is long and part of the story itself. Something else came before and lies beneath the fields. We took a long time to get here, if we ever did. That simultaneously comforting, questioning, and warning opening sentence signals both the continuity of modern Britain with his concerns and creates a space for Ishiguro’s Dark Age novel of myth, legend, love and memory to occupy.

“It’s queer the way the world’s forgetting people and things from only yesterday and the day before that. Like a sickness come over us all.”

The Romans are gone. Who knows how long, but their ruined villas dot the country. This is a landscape of magic, ogres, demons, and sprites. Britons and Saxons live separately, but mostly in peace, spread across the “desolate uncultivated land: here and there, rough-hewn paths over craggy hills or bleak moorland.” Time is unmarked. Two old married Britons, Axl and Beatrice, live on the margins of a warren of dwellings dug into a hillside. They are increasingly troubled by the way those around them—especially the young—forget people and events. “It simply did not occur to these villagers to think about the past—even the recent one.” Their candle has been taken from them—too old—yet it is Axl and Beatrice who seem to recall the most, to resist the darkness of “a mist as dense as that which hung over the marshes”.

Axl and Beatrice set out on a journey long put off for reasons neither really recalls, to visit a son neither can picture, who lives in a village neither knows how to reach. It seems they forgot their son for a long time, forgot they ever had a child, although they sometimes wondered, sometimes saw images when half asleep of a small hand held or some conflict leading to their son’s departure. Throughout the novel Ishiguro shifts the reasons Axl and Beatrice think they are searching for their son: he anxiously awaits them, they will live with him and be cared for, they are simply visiting and will return to their village. What remains is the belief in the necessity of their journey and their bond: a belief which has more to do with feeling than memory or knowledge. In that sense Ishiguro is dealing in themes of memory and trauma which run back to A Pale View of Hills.

“He’s our son,” Beatrice said. “So I can feel things about him, even if I don’t remember clearly. And I know he longs for us to leave this place and be living with him under his protection.”

This troubling fluidity of desire, intention, mood, will, and memory permeates The Buried Giant. It is reflected in the landscape through which Axl and Beatrice move: a landscape without reference points, where fiends attack from behind, and strange tableaux emerge from the rains and forests. This strange rootlessness of a country which is nonetheless England recalls the floating village of Jim Crace’s Harvest; and the troubling half-recognised narrative space of Quarantine. The Buried Giant is in many ways a fusion of Ishiguro’s literary concerns: the loss of memory and control, and a troubling ethical environment which we cannot entirely reject, because it is grounded in love and care.

“An old burial ground. And so it may be. I dare say, sir, our whole country is this way. A fine green valley. A pleasant copse in the springtime. Dig its soil, and not far beneath the daisies and buttercups come the dead. And I don’t talk, sir, only of those who received Christian burial. Beneath our soil lie the remains of old slaughter.”

At the heart of this novel are the conflicting necessities, the paradoxical duties of remembrance and forgetting; and in that twin necessity is an allegory both of history and of love. Axl and Beatrice’s journey and their simultaneous fear of remembering and forgetting the life they have shared forces us to think about the differences between national memory and the memories of love. Reconciliation requires both acknowledgement of past wrongs and a kind of forgetfulness which can so easily become a belief in the necessity of suppression in the cause of national pride, recovery, and stability. (“Is it shame makes their memories so weak or simply fear?”) These are motives easily recognised in modern Russia and China, but which is equally insidious in the whiggish tendencies of a Britain in the midst of a celebration of Magna Carta.

“…I wonder if what we feel in our hearts today isn’t like these raindrops still falling on us from the soaked leaves above, even though the sky itself long stopped raining. I’m wondering if without our memories, there’s nothing for it but for our love to fade and die.”

It is tempting to link Ishiguro’s Beatrice with Dante’s, but Axl is old and his crossroads are unlike those of The Divine Comedy. We remain in the dark wood throughout The Buried Giant. Beatrice is Axl’s constant companion: a picture of love—another winding lane, another concept with darkness lurking beneath it—more honest than Dante’s courtly infatuation.

“Are you still there, Axl?”

Yet, Ishiguro retains something of Dante’s journey—something shared with journeys from The Odyssey to The Pilgrim’s Progress—as Axl and Beatrice meet figures who represent conflicting approaches to memory, duty, shame, peace and revenge. Unlike those legendary journeys, however, there is little moral clarity or satisfaction to be found. The fantastic is deployed, at least in part, to undermine the allegory of the journey and mythic ideas of nationhood. Indeed, it is one of the advantages of fantasy that creatures, landscapes, and characters can become representative of aspects of humanity in a manner realism militates against. The legendary characters or creatures that populate the novel are often weak and tired: implicated in the false logic of genocide and the suppression of memory in the service of peace. In that respect, the influence of Michael Moorcock can be detected in The Buried Giant.

“We must hope God yet finds a way to preserve the bonds between our peoples, yet custom and suspicion have always divided us. Who knows what will come when quick-tongued men make ancient grievance rhyme with fresh desire for land and conquest?”

It may well be that the shifting and veiled narrative of The Buried Giant frustrates many. Yet, rather like Keith Ridgway’s otherwise very different approach in Hawthorn and Child, the resistance to narrative cohesion is part of the point. Memory, shame, duty, and vengeance are part of the story not just of England, but the world: part of us; and the winding path of love runs not to Dante’s paradise and a beatific vision, but to moments of joy, contentment, ease, conflict, resentment, union and separation. It is in that respect—and despite its Dark Age demeanour—a very timely novel. It will take some time to tell, but I think The Buried Giant is a serious achievement: one that will split people. Which seems rather fitting.

The Buried Giant is published by Faber on the 3rd of March 2015.

My thanks to Faber for this review copy. 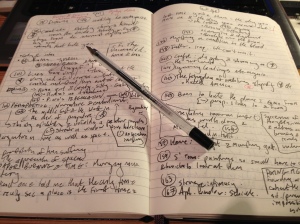 These Little Words has posted my selection of a few of my favourite books of 2012. I’ve enjoyed an awful lot of books this year, so this list is by no means exhaustive. 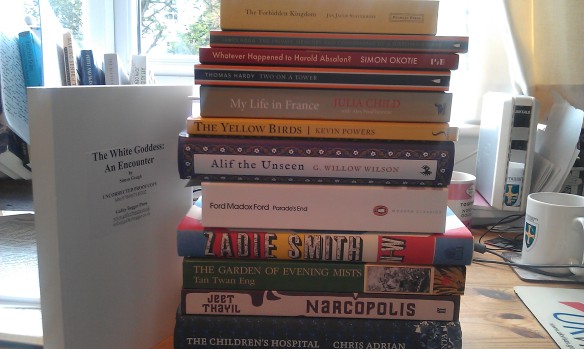 So, this pretty poorly photographed pile of books represents my reading plan for the next few weeks and months. I’ve already started Parade’s End and will be reviewing each of the four novels separately before summing up at the end. The Garden of Evening Mists and Narcopolis are the last of the Booker Longlist books which I have. I’m as yet undecided as to whether I will buy the remaining four novels to round out my Booker Series. The White Goddess, Alif the Unseen, NW, and The Yellow Birds all come out around the end of August and the beginning of September, so those are fairly high up the list as well. As is Simon Okotie’s Whatever Happened to Harold Absalon? and The Forbidden Kingdom from Salt and Pushkin Press respectively. I’m also continuing my reading of the Penguin English Library so as to bolster my woeful acquaintance with ‘classic’ literature – whatever that means. The mammoth The Children’s Hospital, which was released a few years ago in the US, looks very interesting (as well as having a great cover). Finally, My Life in France by Julia Child should make me both pretty hungry and yearn to wander some Left Bank book-haunted alley-ways in a dependably clichéd manner.